Reasons to vote for Trump 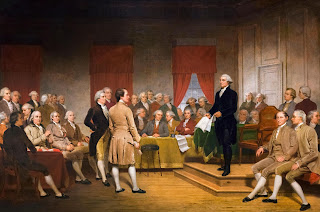 I am sorry for classical liberals who think otherwise. I do not really mind if my so-called repute is now thrown overboard, yet I would indeed regret to have ever refrained from speaking out the dictates of my conscience in trying times.

Let me state this clear: Trump is not exactly my ideal, and of course, he is not a classical liberal. If the election were between Ron Paul and him, obviously Ron Paul would be the right choice. But such is not the world we live in. This is a dreadful moment in history, whose seriousness is not quite grasped by lots of liberals reading these lines.

For many years now, the USA have been falling into a dramatic decline in their original foundational ideals. Note that I am not referring to the everlasting debate between the federalists and the anti-federalists. By foundational ideals I mean the 1787 Constitution, the 1789 Bill of Rights, and the 1776 Declaration of Independence –which, albeit imperfections inherent to all that is historical in nature, are classical liberal documents.

Over time, the USA started to deviate from those ideals, although a line could still be drawn, at least, in the duality between Democrats and Republicans. We might say that, from the Kennedys up to Al Gore, the debate was Rawls versus Nozick –i.e., more active redistribution policies vs. expense restriction policies. J. Rawls, hated by many libertarians, regarded those foundational documents as the constitutional essentials to be abided by all. Surely, I would vote for J. Rawls versus Trump.

Long before the Kennedys, two Western ideas, two Western pathologies (phrasing a neglected García Venturini) expanded throughout the West, and particularly across the USA. I’m talking about the incoherent yet effective combination of neo-Marxism and post-modernism.

Neo-Marxism is a two-phase mutation of Marxism: The first phase has been fundamentally economic, with the Cepal’s Dependency Theory –accepted, alas, by the Catholic supporters of the Liberation Theology of G. Gutierrez (1958). A second and much more detrimental phase is given by the assertion that there are new exploited collectives, the hetero-patriarchal system being the new exploiter. The exploiters are white pro-market Westerners, while the exploited are women, Afro-Americans, indigenous peoples and gay, lesbian and trans persons.

It is worth reminding that this kind of thinking undermines the very essence of the original American political pact. In the case, there is no longer a whole of persons (“all men…”) conceived as subjects of rights before the power, but exploited collectives coherently denying their exploiter a “Bill of Rights” assisting the latter. No longer can we speak about a society where all human beings (whether homo or hetero persons, white or Afro-Americans) are imbued with rights, regardless of their color, etc. (as flawlessly concluded by the classical liberal Martin Luther King in his famous speech), but about a society shrouded in the veil of class struggle setting ones against the others. This automatically cracks the very essence of the USA.

Added to this is post-modernism, which claims that there is nothing good or true in any culture. Hence, nothing morally superior resides in a West where the idea of individual freedoms emerged. The combination of both amounts to a cultural atomic bomb for the West: the ideals of classical liberalism are attacked by the neo-Marxism as an exploiting hetero-patriarchal system, but when the West tries to defend itself, it fails, because there is nothing morally good –except (and here lies the effective incoherence) Marxism, of course.

This has all been taught to exhaustion in the US colleges since before the 1960s. Not only has this been conveyed to generations of people lacking critical thought, but further, whomever thought or thinks differently has been and is persecuted and attacked in countless and cruel ways –as soundly shown by Axel Kaiser in his last book[1]–, thus producing a spiral of silence among those who secretly know that this is worse than Hitler’s tanks –because the one and only advantage in Hitler’s case was that he clearly looked like Hitler.

Consequences transcend the already disastrous economic policies proposed by the left wing of the Democratic Party. Americans have been all too gullible in assuming that the Communist Party was not growing in the USA –just as those Argentines who assume that communism did not grow in Argentina “because the peronismo existed”. The sheer truth is that the left wing of the Democratic Party in the USA is the most efficient communist party in the history of the struggle for freedom. Because those Marxist and post-modern ideals –which did not hit the Kennedys– have now permeated the Democratic Party, being Kamala Harris and Joe Biden their most paradigmatic representatives. Above all Kamala Harris, the new president of the USA in case puppet Biden wins the elections.

The “program of government” of this singular communist party in disguise could not be more coherent with the most cherished destructionist ideals[2] of the revolutionary communism.

1.        Destruction of the remains of religious freedom, freedom to teach and free speech, with federal laws expanding alleged hate and discrimination crimes to embrace whomever dares to act and think different from the aspirations of the LGBT and Z lobby.

2.        Destruction of the remains of religious freedom, etc., with the forced imposition by the federal government’s of reproductive health policies, abortion and integral sexual education, allowing no room for appeal to freedom of conscience.

3.        Destruction of the economy by the funding of anti-market environmental policies which may include the irrationality proposed by AOC at a federal level.

4.                  Encouragement, by the federal government, of attacks against life and property (lootings, etc.) by groups such as Antifa and “only” Black Life Matters, portrayed as angelical “peaceful protesters”. Judicial persecution of whomever exercises their self-defense right.

5.        Removal of the Second Amendment –citizens bearing arms would become the bad guys, but not criminals or governments bearing weapons.

6.        Destruction of the remains of individual liberties by imposing at a federal level all dictatorial compulsory confinements, cold-heartedly and harshly applied by Democratic governors and mayors.

7.        Removal of all freedom of speech for those who think differently, by resorting to fact-checkers, fake-news allegations and the “denialist” offense. Totalitarian use of the Covid-19. Monopoly of social communication by the Deep State in collusion with Facebook and Google.

8.        Judicial persecution of anyone bold enough to denounce the crimes of the Deep State.

9.        Enlargement of the Supreme Court and ensuing destruction of the independent Judicial Branch by turning the Judiciary into another extension of the Democratic Party.

10.    More foreign debt escalation, fiscal deficit, tax pressure and inflation as a way to fund all of the federal government’s policies. Further devaluation of the dollar.

And I am putting it mildly. Very mildly.

There is more to it: In the best possible scenario –that is, in case Trump wins–, the Republican Party will not be just one more party, but a “resistance” against the seizure of power by the New Communist Party and complete destruction of the USA. The question is, how much longer?

How much longer will some manage to keep offering resistance?

How may the persisting cultural tsunami causing all this be possibly halted?

Where to flee if the worst should happen? Nowhere.

World War II was appalling, but at least the enemy was clear, as were hopes in case of defeat. Still, the enemy was not defeated –preventing Patton from getting to Moscow was the most hideous mistake, the most tragic error of the US government of the time.

What I mean to say is that at least Hitler looked like Hitler, and his defeat was hope. Now, the enemy is camouflaged; people fail to see it, and vote for it.

Trump’s victory barely saves some time. Be well aware about what is at stake in this –pun intended– “election”.