THE HORRIBLE CONSISTENCY OF THE CANCEL CULTURE 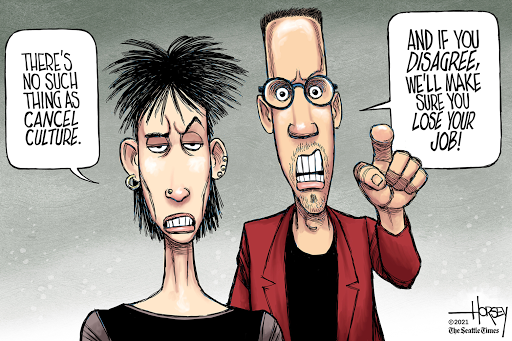 Let's tear down the statue of that guy, because he had an African-American slave. Let's tear down the statue of Juan de Los Palotes, because he was part of the evangelization of the Kingdom of Felipe II. We will tear down the US Constitution, written by misogynistic and racist white males. And let's continue. Tell Macron to wipe the Napoleon monument off the map (I know some Trad Catholics who would be very happy). Come on, let's tear it all down. Let no one remain except of course a huge monument to Kamala Harris and Barack Obama.

I'm sorry to tell you that they are consistent. Because they are ideologues.

Ideology does not support middle terms nor does it know the term evolution. Ideology is convinced that the perfect social system exists. It does not conceive of human history as an evolution, always in motion, never, simply never, reaching that long-awaited end of history. It does not admit the market as a process, always imperfect. If human history is not the model of perfect competition, the perfect, stable, unique, eternal, and immutable social system, it is because there are people who try to delay the perfect society with their dark interests. They are the dissidents, the counter-revolutionaries. They must be eliminated. As the most coherent liberation theologians said, those who today walk through the Vatican, never better said, like Peter at his house: we love everyone, the rich too, because the revolution will free them from their condition of exploiters. Oh, how beautiful. What charity. Those are indeed Christians. Not like the Acton Institute.

So, of course, the Independence Declaration was imperfect. Of course, it said "men" and not "human beings". But that "men" meant an evolution towards. Oh no, not that. Imperfection, imperfection! Vade Retro Satan! Of course, it was Martin Luther King who said that it was that Declaration that allowed him to make his famous claims, but better not to say it, no?

Sure, there are circumstances and circumstances. But distinguishing them is a matter of political prudence and that, of course, is not the way of the ideologue. Yes, ok with the Nazi symbols being removed from Germany in 1945. But for ONLY Black Lifes Matter, Hitler and Jefferson were the same. It's that simple people. Don't you see it? If you don´t, you are a whites supremacist. Are you African American and you do NOT think so? Then you are white. Joe Biden Dixit. But surely he has already forgotten.

God bless the cancel culture boys, or girls, or Martians, or however, they perceived themselves.

Because they will rid us of our imperfection. In other words, of our humanity, but that does not matter.